Have I Been Gone That Long?

I keep thinking about blog posts then rejecting the ideas because I don't think they would be that interesting, or that they are interesting ideas that I can't possibly do justice to, or I'll fall back on the old standby that, hey, I've got more pressing work to do -- do you want to write, or do you want to write about writing?

It's been summer, if you haven't noticed. In summer, I often work late at night when the temperatures are down (okay, I work late at night during the other three seasons as well -- but summer gives me an extra reason). Late at night is a good time to work, but it can also be a time when all your insecurities come out. Who cares? Who really cares about all this junk?

Good lord, what have I done with this month?

I have put together another e-book, by golly. It's called Into a Space Unseen and it features three published pieces -- the plan behind these e-books was that I would quickly put them together, hit the "publish" button at KDP and, badda-bing badda boom! I'd give the books some basic pluggerino because, after all, you don't go to all that trouble and just try to hide the damned things. Especially since it would be nice if a few people buy the e-books.

Part of this e-book experiment has to do with seeing if this sort of e-book publishing produces some viable revenue.

Yes, I am destitute. I broke open my last piggy bank to make it through the end of the month. I will not get paid for teaching until October. I would very much like not to have to make statements of this sort.

It's not that I don't enjoy the great cosmic uncertainty that faces me now. It's only a more highly defined version of the uncertainty under which everyone lives, for as long as they live. Try as one might, funds go south. Health goes south. Reputation goes south. Friends go south. I am living at a time and in a country where upheavals come every week (I was about to say, "With every morning paper," but you already know what happened to those). There's no way to get through this life without making a few gambles.

Of course, some folks are lucky enough to make gambles they can afford.

Others will say, "If you can afford it, it's not gambling."

By that definition, I'm gambling.

Forty years ago, when I entered the "regular" job world, I did so because I believed it would be a temporary thing. At some point, I would kick into whatever it was I best suited for, whether that was writing, teaching, sitting at a desk and sorting things out in a way that would satisfy some who might pay me, and satisfy myself that I was doing work that I was best suited to do, that added to my life and gave my existence what can be loosely defined as "meaning." I would take my rightful place in the world, be it as a subsidiary functionary or as a significant "voice," a "contributor," in some way, to the progress of humanity and civilization.

After a decade in the "job world," I realized I entered a trap. And I lacked the means to escape. The decision, it seemed, wasn't mine to make. You don't decide to contribute to the culture; the culture decides whether you will or not. Resistance may not be futile, but it's one hell of a battle without sufficient allies, funds, resources, opportunities, etc.

So, after I finally got thrown from the train called "Useless Shitwork" and dusted myself off, and upon discovering that a canned newspaper employee in his late-fifties isn't particularly desirable -- oh, hell with that . . . I was NEVER desirable as a hire of any sort -- when I did get hired it was on the strength of someone's recommendation or because I came through the door when the people hiring were desperate enough to hire anyone. I kid you not. Anyway, having dusted myself off, yadda yadda as before, I decided, "Well, I tried it their way. Maybe this time I can try it my way."

So here I am. Destitute.

Okay, so what else have I done during the dog days?

Headaches? Arthritis? And just the other day I picked up a stomach bug, or I might be enjoying my eighth ulcer. August is never good for my health.

Even so, I've really enjoyed most of my trips downtown on the Metra. The walks to the train station. The walks back. Running into colleagues and former students at Columbia. Meeting with my writing group over at Cafe Perla. Visiting the writing group Trey Thoelcke runs at College of DuPage (the Semi Os), all the work I've done hammering out a reading list for my fall Science Fiction Writing class. Likewise the Short Story Writing class I'll start teaching Tuesday (though I'm still rifling around looking for my master of Katherine Mansfield's "A Dill Pickle," which I want them to read for my first session).

Have I finished writing "Dixon's Road"? No, but I'm close. And I feel as if I've finally found the moments where the story should pivot and kick my readers in the head. The science fiction readers/critics who do the reviewing and pooh-poohing in the field won't get it. They never get my shit. Because one thing I'm going to throw at them is the crazy notion that poetry has a "future in the future" because it isn't technological -- because it's verbal and visceral. And while they're chewing over this "old fashioned" notion of mine, they'll miss the rabbit punch about the "love story" between my protagonist and the woman he knew almost a century before and how the house he once lived in, which has become a museum, is part and parcel of the love story; that the people and the house and everything else is inseparable and lost -- they won't even notice that. Though I hope a good editor notices.

And the story I started called "The Agent," now called, maybe, "Reggie is Reggie"? I still have some rough rows to hoe. The main roughie is still going to be how Charlotte manages to meet the other kids in her little "cell" with all the draws from her attention in the social networking world? We have already learned to shut off so much marketing and data-mining "noise," how will Charlotte recognize that Reggie is bringing all these people together for something other than selling them more shit they neither want nor need?

I read another section of The Va-va-va VOOM! at the Gumbo Fiction Salon open mike this month, and it seemed to go over pretty well. I have to send it to the person at Tor responsible for sorting out authors and new editors after the departure of Jim Frenkel. I have over 60,000 words of novel, but I still have to hammer the outline down. Hasn't the outline always been the biggest headache?

And "The Man Who Put the Bomp"? There's still several important scenes I need to write, but the shape is getting there. Every saur story I write can't be just another saur story. It's not simply a matter of progressing the "plot." but in adding to the scope and outlook of the world the saurs occupy.

And something new has been coming into my head -- no not really new, but more like something I played around with before but now I think I can really try to work upon. It's a story I want to call "The Home Run," and it's about what might happen if Louis H. Sullivan, shortly before his death, gets a glimpse of the world of architecture 90 years on, in the form of the Roosevelt Tower, now situated just north of his Auditorium Building. I came upon a quote from one of his letters Friday, talking about the world of architecture and his own situation therein: "There may be a future, but there is no present."

Damn! If that ain't a kick in the head. I want it to be a brief story, just a couple of thousand words, narrated by an old colleague who comes to visit him early in April of 1924. It's one of those stories I blithely (and foolishly) imagine myself able to knock out swiftly and unequivocably, then find myself doing fifty drafts more and screaming because the one important link that brings the whole thing together has evaded me.

It's September now. I've still got a lot of plans (not even mentioned here) and a lot of work to get done (though I'm down one class, thanks to all the "prioritization" finagling going on at Columbia now). I might even manage to file a few more blog posts. It's a race between my native stubbornness and total disaster.

And the odds are always in disaster's favor. 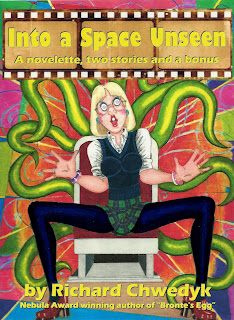 Sometimes I surprise myself.

While editing another batch of stories for e-book publication, I ran into this section of "The Cthulhu Orthodontist," which I wrote for the anthology Cthulhu and the Coeds: Or, Kids and Squids. It's a story about how the divorced father of the young teenager writes two screenplays to help raise money for her orthodontist bill. Sounds simple enough, but it's a story about stories and storytelling and how the making of stories affects our lives in all sorts of ways at all sorts of levels.

This passage explains what Andrew Ulaszek, the dad, writes when he believes that the announced production of "The Call of Cthulhu" is legit and that macabre master Mario Bava is slated to direct: